Manned launches have taken place in several countries and from several differint launch sites. This page attempts to give a general synopsis of each site.

All orbital manned spaceflights from the United States have been launched from Cape Canaveral in Brevard County, Florida. 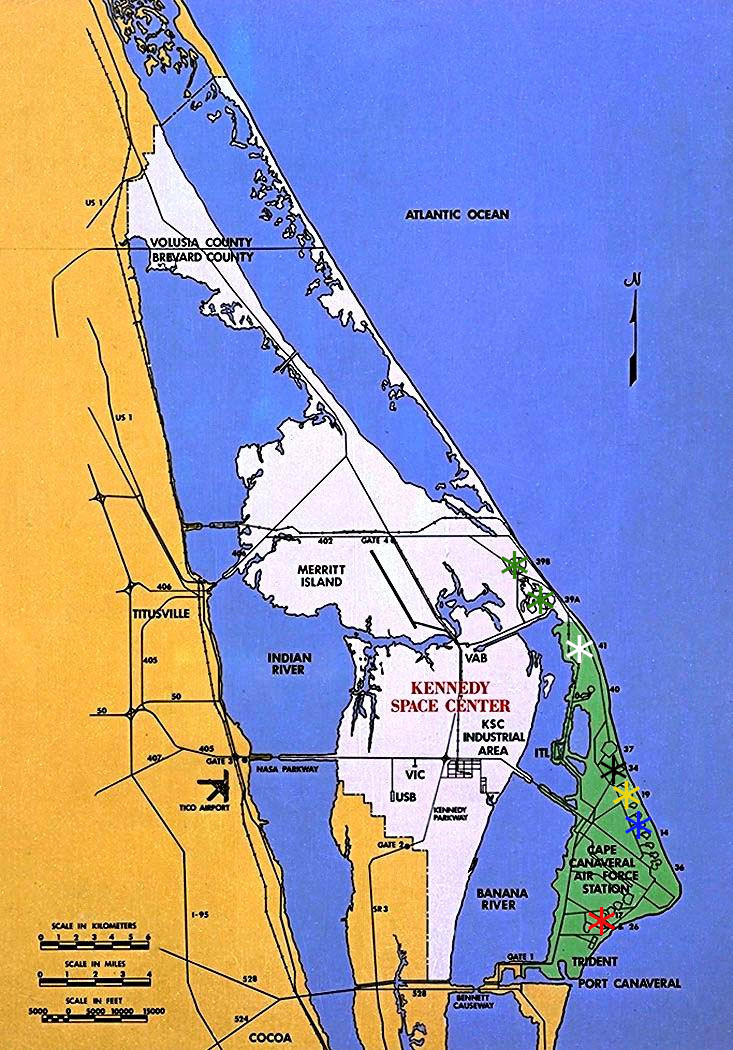 *   LC-39A,B
Pad 39-A was used for all Apollo missions except Apollo 7 and Apollo 10. It was also used for 81 shuttle missions. It is currently used by SpaceX to launch the CrewDragon.
Pad 39-B was the site for the launch of Apollo 10, all three manned Skylab missions, the ASTP, 54 shuttle missions, and will be used by NASA for Artemis missions.

*   SLC-41
Boeing will use this pad for launching its Starliner.

Launch Complex 5 (LC-5) saw 23 launches of Redstone and Jupiter rockets between 19 July 1956 and 21 July 1961. These included the suborbital launches of Ham, Alan Shepard, and Gus Grissoma. The last launch was of an Atlas-Agena target vehicle for use by Gemini XII. The pad has been demolished, but a few things remain.

Launch Complex 14 (LC-14) saw 32 launches of Atlas and Atlas-Agewna rockets between 11 June 1957 and 11 November 1966. The pad was abandoned and the red metal gantry was demolished in the 1970's for safety reasons. Partial restoration began in 1997. Enos, John Glenn, Scott Carpenter, Wally Schirra, and Gordon Cooper began their flights from LC-14.

Launch Complex 19 (LC-19) was home to 27 launches of Titan I and Titan II missiles, 12 of which were Titan II GLV's for the Gemini Program. Ten of those were manned. The first launch was of a TGitan I on 14 August 1959. A pad explosion resulted in heavy damage which took several months to repair. The final launch was on 11 November 1966 at the conclusion of the Gemini Program. The pad has been inactive since.

Gemini V on the launch pad

Launch Complex 39, Pads 39-A and 39-B were constructed for use by the Apollo Program. Except for Apollo 7, all Apollo flights launched from here, as did Skylab and the ASTP. It was then modified for the Space Shuttle. Pad 39-B was also intended for the Constellation Program and re-purposed again for the Artemis Program. Pad 39-A has been leased to SpaceX, which uses it for for multiple murposes, includeing the Crew Dragon.

Space Launch Complex 41 (SLS-41) was previously Launch Complex 41 (LC-41) and began use on 21 December 1965 for Titan III and Titan IV launches. It was converted for use by the Atlas V, first launching 21 August 2002. The site is now leased to United Launch Alliance and will be used by Boeing to launch the Starliner.

Edwards Air Force Base, California is where the X-15 flew.

SpaceShipOne landing at Mojave
BY SA-4.0

Spaceport America, Mojave, New Mexico, is by Virgin Galactic for use by SpaceShipTwo.

Baikonur Cosmodrome is located in southern Kazakhstan and leased to Russia. This has been the site of all manned Russian (and former Soviet) space flights. Two launch sites have been used for manned flights.

Gargarin's Start, also know as Baikonur Site 1 or Site 1/5, is where Yuri Gagarin launched on Vostok in 1961 to become the first man into space. This site is still used for Russian flights to the International Space Station.

Baikonur Site 31, also known as Site 31/6 is used for manned launches when Gagarin's Start is unavailable.